A Great Success for Winsen on Sensor + test 2015 in Nürnberg, Germany

• 548 Exhibitors
• Approx. 7,200 visitors
• Two first-rate international conferences
• Train-driver strike evident
Clouded by the two-day strike of the German locomotive engineers union GDL, the 22nd SENSOR+TEST Measuring Fair in Nuremberg came to an end today. After a considerable increase in visitors of about 15% on the first (non-strike) day of the fair, the exhibitors as well as the organizers had to acknowledge a noticeable decrease on the second and third day

Winsen Booth: Visitors increased by 20% Despite Rail Strike
As one of the six Chinese AMA numbers, Winsen gained a great success on the 22nd SENSOR+TEST Measuring Fair in Nuremberg again. About 150 visitors and 115 companies had visited Winsen booth during May 19th to 21st,2015. Visitors increased by 20% compared with 2014 even though the fair’s visitors drop by 10% due to the two-day Rail strike of the German locomotive engineers union GDL. 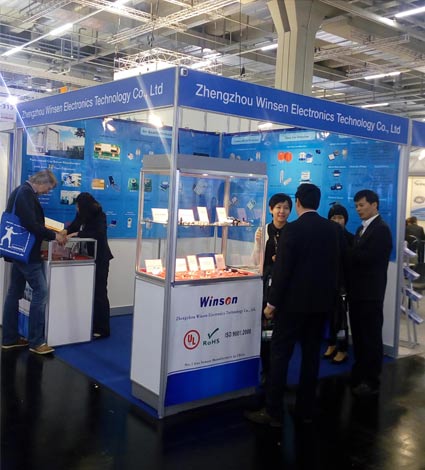 Along with Winsen’s state-of-art air quality detection sensors for VOC/CO2/CO/formaldehyde gases, Winsen’s booth attracted attentions from all the customers who is searching for ideal products for air quality detection. As leading gas sensing solution supplier in China, Winsen possessed the biggest gas sensor R&D team,the most complete and largest production lines in China, even in the world.
Besides, Winsen’s electrochemical carbon monoxide sensor ME2-CO which had been a USA UL-listed product since Feb. 7th.,2013 and other electrochemical toxic gas sensors for industrial use also drew great attention from numerous European customers.
Additionally, extended products as Micro flow sensor, PIR motion sensor, MEMS VOC sensor and Pressure sensors also had many visitors.
The next SENSOR+TEST will be held from 10 to 12 May 2016 at the Nuremberg Exhibition Center as in the past. It is to be complemented by the 18th GMA/ITG Conference for Sensors and Measuring Systems and the 36th European Telemetry and Test Conference. The AMA Association and the Exhibitor Committee have decided that the focal topic for 2016 will be “Measuring Technology in the Cloud.”
Winsen will continue to join in this great event at our booth no. 12-315 Hall 12 during 10 to12 May 2016. See you next year!